You may have heard of AC and DC but maybe never quite understood the difference between them, or why we sometimes use one and sometimes the other. All is revealed in this page.

Appliances often have markings such as "240V AC" or "12V DC". This page explains the difference between AC and DC and why it matters.

An electric current consists of a flow of electrical charge around a closed path or "circuit" and so has a definite direction.

A battery or a solar cell creates a positive charge at one terminal and a negative charge at the other. This amounts to a certain voltage (or electrical pressure) which is more or less constant until the battery runs down (or the sun goes in). This is called Direct Current, or simply DC, since the direction is unchanging. 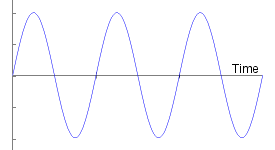 DC is what nearly all electronic equipment needs internally to operate; whether you're trying to play a CD or browse the Internet on your computer, the electronics needs a constant and unvarying source of power in order to do its job. Imagine trying to drive a car if the engine kept cutting out every few yards!

By contrast, mains electricity reverses direction 100 times per second, two reversals making a complete cycle and bringing you back to where you started. That's to say it completes 50 forwards/backwards cycles every second, or has a frequency of 50Hz (Hertz). This is called Alternating Current, or AC, since the direction continually alternates between one direction and the other. The figure shows a graph of the voltage against time for 3 cycles, from which you can see that it's constantly varying like the motion of a pendulum.

Probably the only time you need to understand AC and DC is if you are replacing a power supply, such as a wall cube type of power supply for a radio or rechargeable power tool. The output voltage should be marked on it such as "12V DC". Whether the output is marked as AC or (more usually) DC, any replacement must be the same.

The mains frequency is 50Hz in many parts of the world, but 60Hz is the standard in North and much of South America and a few other countries. The much higher frequency of 400Hz is used in aircraft as this allows transformers and motors to be made a lot smaller and lighter. However, long distance transmission of power at higher frequencies becomes considerably less efficient.

Why would AC be used for power distribution when many applications then require the additional complication and expense of converting it to DC before it can be used? In fact, the earliest power distribution systems used DC. However, AC has several important advantages.

The main advantage of AC is that it can very easily be converted from a high to a low voltage or vice versa using a transformer. Transformers don't work on DC. A high voltage (or electrical pressure) is very good for pushing electricity over long distances, over which the resistance to the flow would mount up. This would be extremely dangerous if fed directly into the home, and a transformer in a neighbourhood substation converts it to a more manageable 240V for feeding into the home.

Another big advantage is a little more subtle. Suppose you need to transmit 1MW (a megawatt) from A to B. You will need 2 wires of a certain thickness to complete the circuit. If you now need to transmit 3MW, with wires of the same thickness, you would need 6 of them. But no, you can manage with only 3!

Suppose you start off with 6 wires and feed each of the 3 pairs with 1MW of AC, but with the AC supplies equally spaced out of phase like 3 spokes of a wheel. Suppose you also decide to replace the 3 return wires by one wire of 3 times the thickness. If you now measure the current in that return wire, you might be surprised to find there isn't any! This is because at any instant one of the 3 pairs will be supplying current in one direction and the other two will be supplying it in the reverse direction. Between them, those two can exactly soak up the return current of the first. So you can dispense with the return wires and still send 3MW with only 3 wires, saving 50% of the cost of wire needed! This is what is meant by a 3 phase supply.

For many purposes such as heating, and historically for old fashioned filament lamps, the direction of flow is immaterial so AC is just as good as DC. All but the simplest electric motors work just as well with AC as DC and some only work on AC. So when universal AC/DC motors were invented, the case for AC power transmission became compelling. In fact, AC is easier to generate as all you need is a rotating magnet and a coil of wire. Positive and negative voltages are generated alternately in the coil as the magnetic field from the North and South poles of the magnet pass through it. What's more, 3 phase is just as easy to generate. All you need is 3 coils equally spaced around the spinning magnet.

DC power is still used in a few specialized cases. For example, cross-border power sharing often uses DC as it would be impracticable to synchronise the cycles of AC between two independent power grids in different countries. For a similar reason, it is used in wind farms for aggregating the power from individual wind turbines since it would be almost impossible to synchronise all the individual turbines to the frequency of national grid.

DC is more efficient also for very long transmission lines. With AC you're continually pushing the electricity during one half cycle then sucking it back in order to push it the other way in the next. If your wire is hundreds of miles long then some of the electricity will never have got to do anything useful at the far end before it starts getting sucked back again!