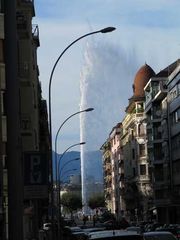 Voltage is like the electrical pressure. If you put your thumb over the bathroom tap and turn it on, you can probably stop the flow because you're only holding back the pressure of the water from the tank in the loft a few feet above your head. If you try the same at the kitchen tap, probably fed directly off the water main, you're likely to get very wet because the pressure is much higher. The Jet d'Eau at Geneva uses an enormous pressure to create a fountain several hundred feet high. Imagine trying to stop that with your thumb!

In the circuit we looked at above the current is driven round the circuit by a battery. That might be an AA cell, which doesn't push very hard. We measure the pressure in volts, of which an AA cell will give us around 1.5, and so it will be labelled 1.5v. If you replaced the battery in our circuit by a source of a few thousand volts, the pressure would be so great that the electricity would form a spark in order to jump over the open switch. And the bulb probably wouldn't last long either! 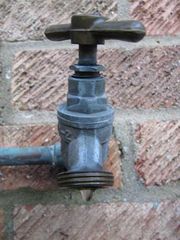 A dripping tap - a tiny flow of water.

The Amazon basin - a huge flow of water.

As well as the pressure (voltage), we'll also be interested in how heavy the flow of electricity is, i.e. just how many electrons pass a given point per second. This is the current, measured in Amps, milliamps (mA - thousandths of an amp) or microamps (μA - millionths of an amp). Remember, since electrons don't like piling up, the current has got to be the same at any point around a simple circuit.

Again, we can use the analogy of water. A dripping tap represents a very small flow of water - it might take hours to fill a litre jar. The Amazon, on the other hand discharges around 200 million litres per second on average into the sea. A small solar cell like the ones on solar garden lights can only produce perhaps a few tens of milliamps of current, but a car battery might deliver 100 amps (written 100A) to turn the starter motor.

We also use kilowatts (KW - thousands of watts) and MW (millions of watts).

Trains running through London on the Thameslink line take their power on the North from overhead lines at 25,000V installed in the 1980's. But on the South they use an older third rail system delivering the same power at 750V. The higher voltage means much less current is needed, and so much thinner wires can be used. A high voltage couldn't be used on a third rail as it's only a few inches from the running rails and the ground, and would be extremely dangerous for track maintenance workers or for anyone falling onto the track. However, the third rail has a large cross sectional area and so can carry a heavy current. Resistance is measured in ohms. It's the number of volts you'd need to drive one amp round the circuit.

If you divide the voltage by the current for an electric motor when it's running you'll get a much higher value than what you'd measure with a test meter. This apparent resistance is what is soaking up the energy and turning it into mechanical energy. It arises because any motor also acts as a dynamo, generating a voltage which opposes the applied voltage. The test meter is only measuring the resistance of the copper wire inside the motor.

A "short circuit" is when a connection is accidentally made which bypasses the parts of a circuit that contain the resistance which would normally limit the current. With little resistance, a very heavy and damaging current can flow causing excessive heating in whatever resistance remains, such as the wire causing the short circuit.

As an aside, silicon is called a semiconductor because, although when very pure it's nearly an insulator, you can make it conduct by selectively introducing impurities. But according to whether the impurity has one more or one less electron in the outermost layer of its atoms than silicon, the current is carried either by negative charges, or effectively by positive charges moving in the opposite direction. By using both types of impurity in different parts of a silicon chip you can do some very cunning things!