Difference between revisions of "SSD Migration and Troubleshooting"

This page covers everything you might need to know about Solid-State Drives.

Solid-state drives (SSDs) have become much more affordable and can offer a considerable speed advantage over conventional magnetic hard disk drives (HDs). They can be highly reliable, in particular, they are very much more resilient to physical shocks than hard disks as they have no moving parts. Replacing the HD by an SSD can give a new lease of life to your computer by making typical use much faster.

Always ensure that the user's data is fully backed up before attempting a migration or any kind of investigation or repair. It is good practice in any case to regularly back up your data.

In most instances, migrating from a hard disk (HD) to a solid-state drive (SSD) will offer a substantial speed improvement. It is important though to check other issues that may affect performance; see how to deal with a slow laptop for Windows computers and how to speed a slow OS X computer for ones running OS X.

Installing an SSD is usually easy and with ensuring there's enough memory is usually easy to do. Migrating the operating system, if the original hard disk is still in good working condition, takes longer and adds some complexity.

Which SSD do you need?

You need to get an SSD of the right size and with the right interface (or with an adapter). You can usually find this information in the specifications for your computer or by looking at the installed hard drive. Most modern laptops, from 2008-9 onwards, need a 2.5" SATA SSD and desktops can accommodate a 2.5" SATA SSD. SATA is the name of the interface and specify the connector on the SSD that will connect to your computer. Older computers used mostly a PATA interface.

As 2.5" SATA SSDs are the most common ones, best if possible is to go for one of these and use an adapter if needed (you can obviously fit a smaller size SSD in a larger space). As for the capacity of the SSD, smaller is cheaper so it will depends on your usage and what you can afford. Several SSDs are sold with a five years warranty which can be used as a proxy for quality.

This table shows options for SSDs depending on the interface of your computer and the size of the existing HD.

Before embarking on a migration, you should ensure your BIOS is up to date. As soon as you have installed your new SSD you should check the SSD manufacturer's website or the tools that come with the SSD for a utility to ensure you have the latest firmware.

Considering that 2.5" SATA SSDs are most common, best would be to for one of these and get an SSD Holder to make it fit without moving in the 3.5" space. The holder is a cheap bit of plastic that holds the SSD in place.

Most computers since 2008-9 have been sold with 2.5" SATA HD. To physically replace the HD with a 2.5" SATA SSD consists of simply taking out the HD and putting the SSD in. Usually the drive bay is accessible via a trap door so there's no need to open the computer and this is very easy to do.

This is rare, but if this is your laptop, you'll need an mSATA SSD and an mSATA to 16-pin 1.8" μSATA adapter.

Note that μSATA is sometimes written uSATA or microSATA. This is different from mSATA.

As old desktop computers do not have any SATA sockets, so to use a SATA SSD, you need to install a SATA interface using a a PCI card. So you will need a 2.5" SATA SSD, a plastic holder so it fits in a 3.5" slot and a PCI SATA card.

Different laptops use different voltage for their IDE/PATA interface so before getting a converter you need to figure out if your laptop requires 5 V as is most common, or 3 V as is used for IBM/Lenovo ThinkPad X40, X41, X41T laptops . Do not get the wrong one or you risk to damage your SSD. So you will need a "mSATA SSD, an mSATA to 44-pin IDE/PATA (3 or 5 V), and for some laptops also a 2.5" enclosure. 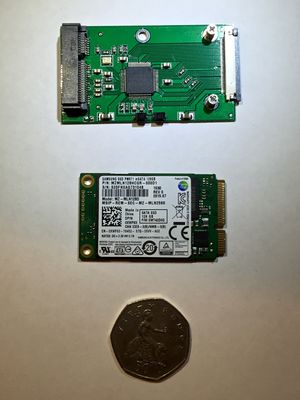 In all cases, when switching the HD with an SSD, you usually need to transfer the four screw (two on each side) of the HD to the SSD that are there to hold the drive in place. As mSATA SSD with an adapter is smaller than 1.8" hard disk space, you may add some cushion with cardboard etc to stablise the SSD.

Starting from fresh or cloning

Swapping the hard disk with an solid-state drive is an opportunity to consider how you use your computer and decide whether you want to stick with your current operating system installation (often Windows or OS X) and clone it to the new drive, reinstall the same operating system and copy your essential data or installing Linux. Another option is to set up a dual boot between the system you were using and Linux. SSDs often, but not always, come with tools to simplify the process.

Note that if you want to clone your HD or copy data from the HD to the SSD you will need to connect both to your computer simultaneously. To do this, assuming you get a SATA SSD, you need a SATA to USB adapter cable or a USB enclosure for SATA drives so one drive will be installed in the machine and the other will be connected to a USB port. You can then reuse this cable or enclosure with your old HD to use as a large USB key. Be careful to get the source and destinations right when doing any cloning, reformatting or reinstalling.

If you intend to clone your old HD to your new SSD, for most cloning software to work, your SSD needs to be the same capacity or larger than your HD. You can usually clone a larger HD on a smaller SSD as long as the aggregate size of the partitions you are cloning are smaller than the capacity of the SSD.

If you have a Linux CD or USB key, this will likely include the GParted partition editor. On Windows, you can use a product such as MiniTool Partition Wizard Free Edition or EaseUS Partition Master Free Edition. And OS X has Disk Utility.

Also you check the health of your HD before attempting to clone it as bad sectors might cause the cloning to fail. You should also fix any other issues that may affect performance; see how to deal with a slow laptop for Windows computers and how to speed a slow OS X computer for ones running OS X.

Often cloning software is provided with the SSD, otherwise there's free software running on Linux such as Clonezilla.

If you are using Windows and want to keep using Windows, you may want to reinstall Windows and your applications from fresh onto the new SSD and then copying your data. Performance of Windows tend to degrade with time, so a new install will give you an additional boost of performance. You will need all your original software and serial numbers to proceed.

This allows you to experience the speed and convenience of Linux while give you full access to your previous operating system allowing you to take your time to decide what option suits you best.

Understanding the technology of SSDs

Hard disks drives as the name implies are mechanical as they have rotating disks, while solid-state drives have no mechanical moving parts. As nothing moves access to any data is much faster than on a HD. That's not the only difference under the hood. Whereas in a hard disk, the act of writing to a sector (typically 512 bytes or 4 KB ) erases the previous content, an SSD must erase a page (the equivalent of sectors, typically 4 KB) before it can be written to and it can only erase blocks of several pages.

Modern File systems use 4KB cluster, see File systems suitable for SSDs; Default cluster size for NTFS, FAT, and exFAT if you format and partition in Windows Vista later, you have no issues. [1] However, if you use older windows or 3rd party software, copy a partition to SSD, or changing a partition size/location, for best performance ensure that partitions are aligned on a 4 KB boundary.

TRIM (The modern SSD support this command, required by OS support as well, see the below)

Unlike hard disk drives, SSD requires to erase old data first then write new data to the same location. The Trim command enables an OS to inform an SSD which deleted data blocks are reusable. Accordingly the SSD internally reclaims the data block in advance before reusing the blocks. TRIM can improve the overall performance and durability because the SSD performs time consuming erase command timely and effectively in background to avoid read-modify-write operations. [2] [3]

TRIM is not essential, as the modern SSD has an intelligent build-in garbage collection mechanism, but can help prolong the life of an SSD and keep it best performing. For a more detailed explanation see Ask Ars: “My SSD does garbage collection, so I don’t need TRIM… right?”.

As Windows7 and later version have native support for SSDs, Windows will automatically detect SSDs [4] and optimise accordingly such as Trim, no background defragmentation as a default. See File systems suitable for SSDs You don't need to take any action.

To check that TRIM is enabled in Windows, launch a command prompt as Administrator, and type the command:

This should return a value of zero. If it returns 1 then type:

Also, check the BIOS settings and find the SATA Mode. This should be AHCI, if your hardware support this. (This has to be done before SSD installation)

An SSD should give trouble-free service and in particular, it will be much less prone to damage through physical shocks than a hard disk. Nevertheless, if it should fail, it may do so catastrophically, with little chance of getting your data back. Bear this in mind if your data is vital to you, and make sure you back it up regularly.

SSD vendors often supply a SSD utility programme, which includes health monitor program and S.M.A.R.T Diagnostic Tool. The S.M.A.R.T is an industry standard disk reliability test program.[6] If any problems encounters, run these program first, In case if you would find any error, backup important data first and Contact vendors technical support immediately with the test results, which helps to perform quick diagnostics by vendor support. Linux users can use a GUI Linux disk utility.[7]

Intermittent freezing can sometimes be caused by a conflict with the way the host SATA controller deals with power management for the SSD. AHCI Link Power Management is a technique where the SATA AHCI controller puts the SATA link to the SSD into a very low power state when there is no IO (input/output) activity for a period of time. The controller automatically puts the link back into active power state when the workload resumes. This is done to save power consumption by the SSD. On some host computers this can cause the SSD to freeze intermittently when returning to a full power state.[8]

(copy from SanDisk Support page, no link is available)