A stuck lens is a very common problem with digital cameras and in this page we describe some simple no-disassembly things you can try. A variety of other faults are commonly seen and disassembly to replace a faulty part is not difficult.

In the years since they became affordable and widely available, digital compact cameras have grown vastly more capable than the film cameras they replaced, but unfortunately not more reliable – there’s much more to go wrong! But a camera may not be as hard to fix as you think.

Stuck lenses seem to be the commonest problem. Simple no-tools measures can fix around 40% of cases.

Disassembly is not usually difficult, but a disassembly guide or video is almost essential. Replacement of the LCD screen should be straightforward, and it may be possible to fix a jumpy mode wheel. If another camera of the same model can be found but with a different fault, it should be possible to cannibalise one to fix the other.

Disassembly of the lens is likely to be significantly harder but still may be attempted as a last resort. A complete replacement lens assembly may be available.

If you disassemble a camera, take care of the flash capacitor as this may hold a dangerous residual charge long after the camera is switched off, sufficient to give you a nasty shock if you touch its leads or components around it.

The flash capacitor is normally a cylindrical component, typically a couple of cm or so long and maybe 1cm in diameter and with 2 wires usually coming out of the same end. Very often but not always, a protective plastic shield will cover it, considerably reducing the danger.

First, check that the battery is fully charged and still serviceable. Sometimes an old battery may fail almost immediately, even though it appears to be fully charged.

This may seem obvious, but if the camera won't take pictures, check it isn't in playback mode. Check an accident with the settings or defaults menu hasn't put it into an unfamiliar mode.

A hard reset may resolve some problems. How to do this is camera-specific. Consult the user manual or research online.

Check that the memory card isn't full or faulty. Try a different one. Check it by inserting it into a PC or laptop and running CHKDSK (right-click on the memory card in Windows Explorer, select Properties, then Tools. Select Error Checking).

If CHKDSK cannot recover it a corrupt memory card should be formatted, preferably in the camera itself so as to be certain that a compatible format is installed. However, if the card contains valuable photos, try Recuva from piriform.com

Unscrupulous dealers on eBay and elsewhere are known to sell memory cards which report a certain capacity, e.g. 8GB, but only contain, say, 4GB or less. These may appear to work fine until you fill their real capacity, after which they may either cease working or simply overwrite earlier data, corrupting the file structure. A simple Windows program H2testw can determine the real capacity of a memory card by writing as much data to it as possible. However, this will erase the card; it will need reformatting.

A lens which refuses to extend, refuses to retract, or gets stuck half way is very common.

Sometimes the problem can be due to the battery failing or popping out while the camera is on, though most cameras can cope with this. Try an Internet search for your make and model with the additional key words "stuck lens" for any model-specific tricks.

Most often a stuck lens is caused by dirt getting into the gap between the lens barrel sections. The simplest thing to try is a freshly recharged battery, which might just have the "umph" to overcome the resistance. Plugging in an AV cable sometimes blanks the screen, leaving just a bit more battery power for the lens.

You should be aware that all the following measures carry some level of risk of causing further damage. However, if none of them work the camera will normally be a write-off anyway.

If the lens is stuck partially or fully extended, try gently pulling or pushing the lens barrel as the camera tries to extend or retract it. Usually, a middle section rotates as the lens extends, and you can try gently “helping” it. If the lens won’t extend at all, try shaking the barrel out by knocking the front of the camera against your cupped hand as you turn it on.

As the lens extends or zooms, it will naturally tend to suck air into itself like a bellows, and this may also suck dust in. 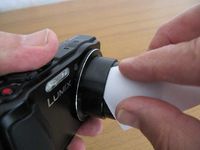 Cleaning the lens barrel with paper

The next stage is to try to remove any dirt from between the lens barrel sections. Slip a corner of a piece of good quality paper into the gap and gently move it around the circumference of the lens as illustrated. Check the paper often for fraying. If there’s a rubber gasket between the camera body and the outer barrel, never force anything under it. 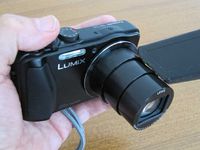 Cleaning the lens barrel with a vacuum cleaner

Now apply a vacuum cleaner crevice tool to the barrel, aiming to apply the greatest possible suction to the gaps you slipped the paper into (as shown). Keep clear of the lens cover on the front of the lens unless it’s fully open as the suction could be sufficient to damage it.

Tapping the lens barrel with a pencil while holding the camera face down can sometimes dislodge a sand particle.

Alternate the paper and vacuum a number of times before giving up. And while you have the vacuum cleaner out, clear all the dust from inside your camera case – it could be what caused the problem in the first place!

Some sources suggest using an air duster. You can try this, but bear two points in mind. Firstly, blowing may simply push dust further into the lens and some of it may come to rest on internal optical components which can't be cleaned. Secondly, air dusters generally don't contain compressed air but a liquefied gas, some types of which can damage lens coatings.

Further variants of the suggestions listed here can be found at http://camerarepair.blogspot.co.uk/2007/12/fixing-lens-error-on-digital-camera.html

As the lens extends or zooms, a series of pegs slide up and down in helical groves. One or more pegs can come out of their grooves as a result of the camera being dropped or suffering a blow. If this is the case, it will normally be apparent that the lens barrel is misaligned. It may be possible to push it back into position. Listen for a definite click as the peg slips back into its groove. 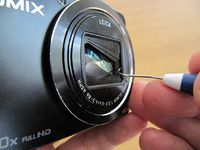 Sometimes the lens cover, consisting of several metal blades, will stick partially or fully open even when the lens is retracted. This could be due to an obstruction in the channels in which the blades are located, just inside the front of the lens, or a tab which holds them open failing to retract. Probe the channels with a dental probe or a piece of bent wire, but be extremely gentle. If you can be sure the blades are fully open and out of the way you can judiciously apply the vacuum cleaner. If however the blades have got bent there may be little you can do.

Disassembly is not nearly as daunting as it might appear. An Internet search for your make and model of camera plus "disassembly" will often give a detailed guide or video. All you need is a set of precision screwdrivers and an egg box or multi-compartment pill box to store the screws. Make a careful note of which ones came from where. Alternatively, stick the screws to a sheet of paper with small pieces of Blu-tack, and write against each where the screws came from or the step number from a disassembly guide. Make sure there's no Blu-tack stuck to the screw thread when you put it back in. 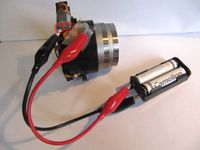 Testing a camera lens zoom motor with a 3V battery.

Replacing a broken screen is fairly straightforward. Just take care removing ribbon cables – some just pull out and push back in, whilst others have a clamping bar on the socket which needs to be very gently pulled or lifted. Yet another method is a push-fit plug and socket which you can lift off with a fingernail and which easily snaps back on, provided it's properly aligned. Our Connectors page lists and illustrates all the types of connector you are likely to meet, and how to disconnect and reconnect thm.

You may be able to test the operation of the lens mechanism by applying a 3v battery to the motor, which should be easily identifiable. Make sure you have identified the motor connections, and not confused them with connections to a sensor which detects its motion, and make sure you don't apply the 3v indirectly or accidentally to anything else. If the battery causes the lens to extend, reverse the connections to make it retract.

A complete replacement lens assembly may be available and shouldn't be too challenging to fit, though there have been reports that some such lenses offered on eBay are actually factory rejects.

Disassembly of the lens, though possible, is not for the faint-hearted. Do not attempt it unless you can afford to spend as long as it takes, and can put it aside in a disassembled state if you run out of time or get stuck. That said, complete cleaning of the mechanism should be possible in order to fix a stuck lens which failed to respond to the simpler measures. You can also clean internal optical surfaces, not otherwise accessible. However, these should not normally get dirty, and it's very easy to make matters worse rather than better, especially with the image sensor. Plastic gears, guides and sliding parts can be lubricated with a thin smear of silicone grease. Don't use any kind of oil.

Make a careful note of the orientation of the lens components as you disassemble them, to help you in reassembly. Disassemble one stage at a time, and practice reassembly until you're confident before moving on to the next step. You may have to reassemble the lens in the open state, or you may have to reassemble it closed. If you get stuck, study the components before you then put them aside, sleep on it, maybe dream about it, and come back to it a day or two later.