Using a screwdriver is easy - who needs a page like this? True - you will often get away with using the wrong screwdriver or not using it properly, but you can easily damage the head, making it extremely difficult to remove an obstinate screw.

First, of course, you need to know which way to turn a screw (righty tighty, lefty loosey). But just as important is choosing the right type and size of screwdriver. Even then, you can mess up badly if you use it improperly.

Screwdrivers have pointy ends and although not sharp like a knife, they can still cause serious injury if they slip or are misused.

Which way to turn it?

Those who are unaccustomed to using a screwdriver are often uncertain which way to turn it.

The easy way to remember is that it's like a tap (not the modern quarter-turn type):

If you know which way to turn a screw-top bottle top or jam jar lid, then it's the same - righty tighty, lefty loosey.

How to use a screwdriver

The key thing is not to let the screwdriver slip. If it does it's liable to damage the head, or "cam out", which will make it harder or even impossible to remove the screw.

First of all, make sure you're using the right type and size of screwdriver (see next section), particularly if the screw might be tight.

Make sure you're holding the screwdriver straight and not at an angle to the screw.

Press hard! If you can't turn the screw easily, PRESS VERY HARD!! If the screwdriver slips, you're not pressing hard enough. But be aware of what might be taking the strain underneath the screw.

If the screw is rusty you may be able to loosen it by applying a little penetrating oil to the thread and leaving it to soak in.

If a screw really, really doesn't want to shift, ask yourself a silly question: were you turning it the right way? Of course you know that you turn a screw anticlockwise to undo it - you're not stupid. But just occasionally you'll find a left handed screw which turns the other way, most usually on a rotating shaft where the direction of rotation might otherwise cause the screw to come loose. A screw on the end of the shaft of an electric motor holding a fan, an impeller or a pulley might have a left handed thread for this reason.

When inserting a screw it's very important to make sure it's straight otherwise you can get a "crossed thread" which will damage the screw or the threaded hole, or both.

You can practice this on a jam jar, or any kind of container with a screw top. People often put the lid on crooked so that the screw thread doesn't engage properly and the container doesn't seal. Turn the lid anticlockwise until you feel the click, then tighten it as normal and you should find it goes on straight.

A screw should be well tightened, but never so much that the screwdriver slips and damages the screw head. If you're sure the thread has engaged properly but it's still very stiff, lubricate it with just a smear of Vaseline or silicone grease or soap.

A separate page covers the many types of screw head and screwdriver.

Many people will have an odd screwdriver or two in a kitchen drawer, but a reasonably good set is almost essential for even the simplest repair tasks. However many screwdrivers you have, from time to time you may find you haven't got the right one for the job. But a well chosen selection will satisfy nearly all your needs. There are several options.

You can buy single screwdrivers individually or in a set, and a set containing 2 or 3 each of flat bladed, Phillips and Posidriv would make an excellent start. If they come in a box to keep them together then so much the better.

For more delicate work you will need some smaller screwdrivers such as jeweller's screwdrivers, however, these tend not to allow a good grip for undoing a tight screw without slipping. 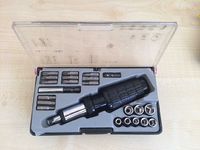 Many people favour a screwdriver set containing a single handle and a range of bits. Since the handle is the bulky part this allows you to be prepared for a wide range of screw types with a single compact set in a box. Choose a set with a comfortable handle allowing a good grip. Many have a useful ratchet action that you can set to clockwise or anticlockwise. 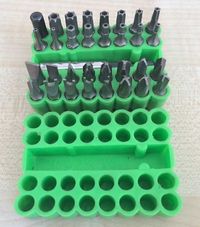 A set of security screwdriver bits.

Most of these take standard 6mm hex bits, and sets of additional bits are available for unusual and security screws. 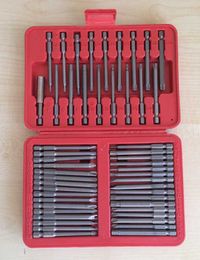 A set of long screwdriver bits.

A disadvantage is that the standard bits are very short, which can make it difficult to reach recessed screws. But you can also get sets of extra long bits.

In addition to the sets taking 6mm bits you can get precision screwdriver sets for working on smaller electronic equipment such as smartphones or cameras. These tend to be a much better option than jeweller's screwdrivers.

If you're faced with a lot of screws or screws which screw in a long way, an electric screwdriver is a tempting option. These generally come with a set of 6mm bits which you can supplement as required.

A disadvantage with the cheaper ones is that it makes it very easy to cam out a screw head since you have little control over the torque applied. Consequently you should only use it on screws which are fairly easily turned, and never on one you can't turn by hand. Also, if using it to insert screws you are probably better off leaving the last turn or two to do by hand.

The more sophisticated electric screwdrivers have a slip clutch which limits the torque applied, but this needs to be set correctly, and it doesn't eliminate the risk of cam out and damage to the screw head if you don't press hard enough.

A separate page is devoted to Rescuing Damaged Screws