This page covers protection devices: not only fuses, but other components which help to prevent a fault becoming a disaster, how to identify them and understand their common failure modes, and how to test them.

Fuses are only the start. Various devices act as the "fire extinguishers" amongst electronic components, providing protection against excessive and potentially dangerous or damaging currents, voltages or temperatures. Some are single-use and must be replaced when blown but others are self-resetting or user-resettable.

Protection devices protect you against hazards such as fire or electrocution and may reduce the risk of secondary damage following an initial fault. They must always be replaced by a device with a similar (ideally, identical) rating, and must never be bypassed or deactivated.

The commonest and most familiar protection device is the fuse, which prevents an excessive and potentially dangerous current from flowing, but devices also exist to absorb an excessive voltage which might cause damage or malfunction, as well as to cut the supply in the case of overheating, such as a kettle boiling dry.

Fuses and a few other devices are used to shut off an excessive current in a fault condition. If you were to replace a fuse with a piece of wire then such a fault condition would create a serious fire hazard.

A card of fuse wire and a selection of cartridge fuses.

A fuse can simply consist of a thin piece of wire with a low melting point. As the current rises, the wire heats up until at a certain point it melts, breaking the circuit.

Some equipment momentarily draws a heavy "inrush" current when first switched on. This quickly drops to a much lower running level. A "slow blow" fuse is often fitted in this case, designed to blow only if its rated current is exceeded more than briefly.

In many cases a "quick blow" fuse is fitted, designed to cut off the current as fast as possible.

In the case of the fuse in a UK mains plug, the fuse rating is the maximum current it can pass without heating up enough to potentially damaging the plug. It in fact a 13A fuse won't actually blow unit the current reaches around 21A.

Surface mount polyfuses (the green components) on a circuit board.

In cases where it might be difficult to change a fuse or where occasional faults might not be unexpected (for example if a motor temporarily jams) a polyfuse might be fitted, also known as a polyswitch or polymeric positive temperature coefficient (PPTC) device.

The photo shows two surface mount polyfuses (the green components) on a circuit board. Wire-ended ones are common, and very similar in appearance to varistors.

Older houses have a fusebox where the supply comes into the house, each fuse containing a piece of fuse wire that you can replace. In newer properties the fusebox contains MCBs instead.

An MCB is an electromechanical device which performs the same function as a fuse. The current passes through a coil, generating a magnetic field. If the current exceeds the rated value for the device then the magnetic field releases a spring which snaps a pair of contacts apart, breaking the circuit. There is normally also a bimetallic strip which heats up with an excessive current and can also release the spring. This is designed to respond in slower time to a persistent current which may not be quite sufficient to trigger the main mechanism. It also provides, for safety, a second means of breaking the circuit, should the first fail for any reason. A lever allows the contacts to be re-closed, reloading the spring.

MCBs are not normally found in equipment and appliances though they may be fitted to extension leads or adapters. 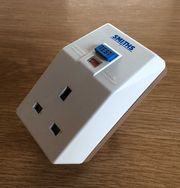 These are easily confused with MCBs but serve a different purpose, though they may sometimes be combined with an MCB in a single device.

Normally, all the current flowing out of one pin of an electrical socket is expected to flow back into the other. If there is a difference, the balance must have gone elsewhere, possibly through someone's body with potentially lethal consequences.

An RCD contains a double coil. If the current from the live wire goes through the coil in a clockwise direction the current returning to the neutral goes anticlockwise, causing their magnetic fields to cancel. A third winding on the same coil detects any magnetic field created by an imbalance, triggering a circuit which releases a spring to open a pair of contacts.

Surges in the mains supply can damage or cause malfunctions in delicate electronic equipment such as computers. Such surges can be caused by faults in the supply grid, by lightning strikes or by electric motors. These could be the motors in domestic equipment such as washing machines and vacuum cleaners or could be heavy electrical machinery such as the motors driving lifts or large air conditioning equipment, but in all cases, the equipment itself should have its own over-voltage protection which requires servicing if it's causing problems.

A pair of varistors and a suppressor capacitor on a small electric motor.

These are also known as Voltage Dependent Resistors or VDRs, and the commonest type are also known as Metal Oxide Varistors or MOVs. Varistors normally have a very high resistance. Placed across the supply input to an appliance they draw practically no current at all, unless the voltage exceeds a threshold. In this case their resistance drops dramatically, diverting the surge away from the appliance itself.

A varistor may momentarily draw a very heavy current, and if this is too great or is more than instantaneous or happens too frequently the device is likely to fail. Each varistor therefore has a maximum rating for the total energy of surge it can withstand, measured in Joules. It would take a very large one to survive and provide protection against a nearby lightning strike.

Varistors tend to degrade if they are frequently called upon to absorb surges and then they may no longer provide protection even though showing no visible signs of deterioration. A large surge may cause them to short out, showing obvious signs of overheating and blowing a fuse. In this case it is likely that other components, perhaps many others will have been damaged.

Telephone wires have always been susceptible to lightning, particularly when carried overhead on telegraph poles. A direct strike is virtually impossible to protect electronic equipment against but nearby strikes are much more common, against which telephone equipment has always contained protection.

A spark gap formed on a circuit board.

Modern equipment such as power supplies may contain a spark gap. A gap of 1mm will spark across with a voltage of around 3,000V, taking some of the strain off other protection devices. You may not recognise it as a separate component as it may simply consist of two arrow-shaped tracks facing each other on a circuit board, or adjacent sections of track without the normal (usually green) solder mask.

Such a gap would be rapidly eroded or become carbonised if used, and its breakdown voltage will depend on board tolerances, atmospheric pressure, humidity and any contamination. It may therefore be intended not so much to save the equipment as to provide, at zero cost, an additional means of diverting static, or to allow the energy of a powerful surge to be dissipated in a way less likely to cause a fire.

Spark gaps enclosed in a short cylindrical sealed case are also available, some of which can divert an instantaneous current of hundreds of amps. These have a much more well defined breakdown voltage.

Here is an instructive video showing examples of both circuit board and enclosed spark gaps. 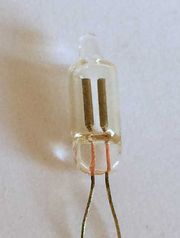 Neon tubes with their characteristic orange glow were very commonly used as indicator lamps before LEDs became available. They contain low pressure gas though which a discharge starts at around 150V. Consequently they too can be used to limit a voltage surge, though the power they can handle is typically much less than a spark gap.

Capacitors are able to store an electric charge and so are very frequently used as "suppressor capacitors" to smooth out low energy voltage spikes. These can be caused by a faulty electric motor or by the switching of another load on the same circuit. In audio equipment this would cause annoying clicks or crackles, and could cause malfunction in digital circuits. Often, they will be combined with an inductor, or a pair of inductors, which help prevent the remnants of the spike reaching the equipment itself.

Suppressor capacitors (see the photo under Varistors) have a special safety rating of Class X or Class Y and it is very important to replace like for like.

Class X capacitors are designed for connection directly across a mains supply, which would be shorted out and possibly cause a fire, if they were to fail.

Class Y are designed for connection between the mains supply and the metal case or earth connection of the equipment. If one of these were to fail the case might become live with lethal consequences.

These are used where overheating is likely to indicate a serious and potentially hazardous fault. You may find one, for example, embedded in the windings of an electric motor in a kitchen appliance.

They come in several forms, always with 2 wires and often consisting of a small metallic tube with a white or coloured end. They contain a pellet made out of an alloy with a low melting point. This retains a spring, but when it melts, the spring snaps open a pair of contacts. Use a multimeter on a resistance range to test it, just as you would an ordinary fuse.

They are quite easy to replace but you must ensure the replacement has the same (or very similar) temperature rating. They are normally connected into the circuit with crimp connections since the heat of a soldering iron may cause them to blow. You may be able to solder them successfully so long as you don't solder close to the body of the device. Hold the wire with a pair of pliers or a damp cloth between the body of the device and the solder joint as you make it, so as to conduct away excess heat. There is a DIY method of crimping using model maker's copper or brass tube.

Where overheating is likely to be a temporary problem caused, for example by a food processor being overloaded or fan being temporarily blocked, a resettable thermal fuse is often fitted. This is typically bolted or riveted to a metal part where the over-temperature is expected.

These resettable thermal fuses contain a bimetallic strip or disk which snaps open a pair of contacts at a certain temperature. Usually, the contacts snap back together again when it's allowed to cool, but sometimes there is a button you have to press to reset it. This type would be fitted if servicing is required before the item is used again, or if it could be dangerous for a motor (for example) to restart unexpectedly.