This page explains the difference between series and parallel circuits, why it matters, and the implications.

You have maybe heard of series and parallel circuits but not known what they are, or whether you even need to know. There are important differences in the way the voltage and current are distributed, which are helpful to understand.

Consider whether your page should include a specific section on safety.

A series circuit is one where the current is forced to flow through one component after another, arranged in a line.

Christmas lights - many low voltage bulbs connected in series. (The squiggle on the left represents the AC mains supply.)

Older Christmas tree lights usually consisted of many low voltage filament bulbs in series. So a set of 40 lights might consist of 40 bulbs rated at 6V each, 40 x 6V being 240V, the standard mains voltage. (In fact these older Christmas lights are no longer considered very safe, but newer ones using LEDs often use a number in series driven from a higher voltage in the same way.)

In the same way, a portable radio might take 4 AA cells, each of 1.5V, giving a total of 6V. But beware, if you mix cells of different types, different states of charge or different ages, when the weakest runs out, the others will continue to force a current through it, and will very likely cause it damage, and possibly causing it to leak.

You can probably now see why all the batteries have to be inserted the same way round. If you inserted one of those 4 AA cells the wrong way round, the other three would produce 4.5V (3 x 1.5V) and the fourth would be pushing against them with 1.5V, so you'd only get 3V (4.5 - 1.5).

The relationship between the voltage and current through a LED or a filament bulb isn't simple, and so let's think about resistors. In these, twice the voltage produces exactly twice the current. So if you connect two resistors in series across a battery, the total battery voltage will be divided between the two according to their resistances. 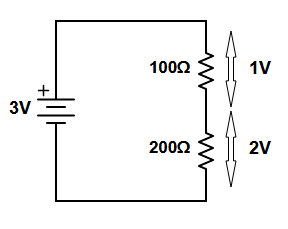 Voltages in a series circuit. (The diagram represents a battery on the left and two resistors connected in series on the right.)

From Ohm's Law, voltage is equal to current times resistance. Since the current must be the same all the way around a series circuit, the voltage across each element will be proportional to the resistance.

Such an arrangement is therefore sometimes called a voltage divider. This is how the volume control in an older radio works. The audio signal is presented across the ends of a carbon track in the volume control, having a certain resistance, and usually arranged as ¾ of a circle centred on the volume control spindle. As you turn up the volume from zero, a contact moves progressively from the bottom of the track, where there is no voltage, to the top, where the full voltage of the audio signal is present. A third of the way up, it will tap off a third of the signal, and so on.

In a parallel circuit, the current can flow through each and every one of several parallel paths.

All the lights and their switches, and the electrical appliances in a house are connected in parallel across the incoming mains supply.

Whereas in a series connection, the voltage is divided between the connected components, in a parallel circuit, the current is similarly divided according to the resistance of each, with the most going to the lowest resistance (and more powerful) devices such as an electric kettle, and much less to higher resistance items such as a low energy light bulb. So the total current drawn is the sum of the currents through each path.

Division of current in a parallel circuit.

Batteries are sometimes connected in parallel when a heavier current or greater capacity is required than a single battery can supply. But they must be of the same type and state of charge, otherwise the stronger will drive a current, possibly damagingly large, into the weaker.

Larger capacity laptop batteries and electric bike batteries, often have 2 or more cells connected in parallel, and multiple such groups in series to provide a larger voltage. Special charging circuits are required to ensure that all cells are charged to the same level and to shut down the entire battery if a significant discrepancy arises due to battery wear or failure.

If you connect a battery to a bulb via two or more switches in parallel, the bulb will light if any one or more of the switches are closed, so completing the circuit. This is essentially how an OR gate in a computer works.

Alternatively, if you connect the battery to the bulb via 2 or more switches in series, the bulb will only light if all the switches are closed. This is how an AND gate works.