This page covers electric kettles, urns and rice boilers, how they work and how you may be able to fix them. It may contain some useful tips which you can apply to rice boilers.

Electric kettles and urns are basically fairly simple devices but the combination of heat, water and electricity can often lead to failures. This is particularly true of cheap electric kettles which frequntly, unfortunately, can't be repaired.

You can often remove the base of a cordless jug kettle by removing several screws in the bottom, though you may need a security screwdriver bit. This will allow you to check the element with a test meter and inspect the switch mechanism. Unfortunately the element is not usually replaceable, and faults with the switch may be due to a small broken plastic part, not amenable to repair. Water leaks, also can be hard to fix.However, this is by no meand alays the case, and it's aways worth checking to see whether, in fact, it's a simple repair.

You may have more luck with urns and water boilers. With these, it may simply be a thermal cut-out fuse which has failed.

Always double check that the device is unplugged before starting work. It could be very dangerous to test it by plugging it in whilst partially dismantled.
Parts may be very hot after the device has been switched on. Be sure to allow them to cool before working on it.

We frequently see broken electric kettles at Restart parties but unfortunately tend to have limited success in repairing them. Most modern ones are cordless, resting on a circular base which is connected to the mains supply. Some older cordless ones have a non-circular base with the connections beneath the handle. Even older ones have a detachable lead and these have an element that you can see when you look in the top, and might even be replaceable. More modern kettles, on the other hand, have the element built into the metal bottom of the jug. 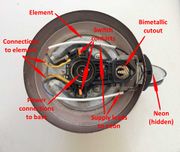 The mechanism in the base of a kettle.

All automatic kettles work by providing a path for the steam, as they come to the boil, over a bimetallic strip or popping disk which bends under the heat, so flicking off the switch.

Referring to the picture, the supply from the base enters via the central pin and the circular contact around it. These are connected to the switch contacts (both live and neutral are switched) and hence through a pair of brass strips, the other ends of which are spot-welded to the ends of the element.

Wires are also taken from the brass strips to the neon, which lights whenever power to the element is switched on.

Often a kettle will also have a thermal fuse as a safety measure to switch it off if it's turned on with no water in it.

As an additional long-stop safety measure to prevent a possible fire if other measures fail, some kettles have an element which is designed to burn out before it gets dangerously hot. Unfortunately, such elements are prone to burning out needlessly. In others, a plastic is used in the switch mechanism which will soften with excessive heat, releasing the spring which holds the contacts closed and so switching the current off. You then have a dead kettle, but at least it didn't burn your house down.

Sometimes the problem is a lid which doesn't close or stay closed, and this can be a broken piece of plastic, not often repairable. There may be some screws under the lid allowing you to access the hinge or catch.

Disassembly usually starts with removal of several screws in the base. Some or all of these may be security screws to prevent unskilled tampering. The base will then come off allowing you to examine the switch, the element and any other parts.

The element is probably the first thing to check. The connections should be fairly obvious and you can check it with a multimeter on a resistance range. For a 3KW kettle it should read around 20Ω, or up to 100Ω for a small travel kettle. The element is not usually replaceable where it's built into the base.

There may be a thermal fuse to cut off the current in the event of the kettle boiling dry or being operated empty. Test it with a multimeter on a resistance range (it should record practically zero resistance). This, you may be able to replace, but make sure the replacement is rated at the same temperature and current. It's likely to be mounted so as to be in good thermal contact with the base of the jug, and a replacement must be similarly mounted.

The switch mechanism consists of several plastic and metal parts allowing it to be switched on by an external control and switched off by the bimetallic strip or popping disk. The plastic parts sometimes get broken, and here too, they are not often fixable. Sometimes, something may get dislodged and by a careful examination you may be able to see how to fix it.

Over time, the electrical contacts which close to boil the kettle may get bent and fail to connect in which case bending them back into place may fix the problem.

Water leaks are sometimes a problem, and these are hard to fix, particularly in the presence of limescale. Steam may get into the switch mechanism and causes corrosion. This too is problematical but there may be some hope if you can clean it up.

Fault finding initially follows the same principles as for a domestic kettle. Instead of a single use thermal fuse it may have a thermal cut-out with a manual or automatic reset. The manual reset types have a button to press which will give a definite click as it resets, but some level of disassembly is likely to be necessary to access it as the button will be very close to live contacts.

Automatic fill types of urn are designed to be plumbed in to a water supply and contain an electrically actuated stop cock. There will be sensors to detect the water level and temperature, feeding into some sort of controller which switches the element and operates the stop cock.

The controller on these may be relatively sophisticated, for example, if switched on empty it may initially fill with a small amount of water and first of all bring that to the boil. It will then top up a little at the time, bringing it back to the boil with each top-up until it's full. Since a 10 litre urn may take half an hour to boil from cold, this allows it to start dispensing boiling water much sooner.

These contain a removable pan to contain the rice and the water, with a heating element beneath. The weight of the pan presses down on a switch which is only closed (enabling the heater) if the pan contains a minimum amout of water. There will also be a mechanical or electronic time switch.

As with an electric urn, there may well be a thermal fuse to protect it in the case of overheating. This may be a non-resettable type which will need to be replaced if it blows. Do not atempt to solder the replacement as the heat of the soldering iron may cause the replacement to fail. Instead, the connections must be made by crimping.