This page covers power supplies: different types and how they work, how to diagnose problems, and how to maybe fix them.

Many pieces of electronic equipment include a power supply unit (often abbreviated to PSU) to convert the raw electrical power from the mains or a battery to the form needed. In this page we explain the several stages in that conversion process and the different ways they can be achieved, and how to recognise the associated components.

Power supplies are often tasked with the control and conversion of a relatively large amount of power in a fairly small space, and some of that power will inevitably be wasted as heat. This heat can lead to failures.

Mains driven power supplies can be dangerous to work on unless you fully understand what you're doing. They often contain large capacitors which can store dangerous voltages even after you've disconnected the mains supply.

Why is a power supply needed?

A power supply performs some or all of the following purposes:

With just a little experience it's generally easy to tell whether a mains power supply is linear or switching mode, without even opening it, just by weighing it in your hand. A linear power supply will contain a mains transformer with a fairly heavy iron core whereas a switching-mode one will feel much lighter.

A switching-mode power supply as used with a laptop or in a phone charger generally includes all of the above elements but not in the same order. The raw mains input is rectified and roughly smoothed, giving mains voltage DC. This is then fed into a switching regulator. The switching regulator includes a transformer to provide isolation as well as to reduce the voltage to a more manageable level. Since the transformer is operating at a very high switching speed it can be much smaller than a mains transformer handling the same power, since it's transforming the power in very much smaller bites. Without a bulky mains transformer containing a lot of iron and copper, a switching-mode power supply can be made much lighter and more compact.

The animation above shows the various levels of sophistication of a linear power supply. Linear power supplies designed to run off the mains contain an iron cored transformer to provide isolation and voltage reduction and further components as required. 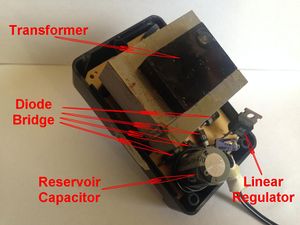 The photo shows a smoothed power supply which has been hacked with the addition of a linear regulator.

Sometimes you will find a power supply split into two parts, for example with a wall cube plugging into a mains socket and containing a smoothed power supply, and a linear regulator in the equipment itself.

Fault finding in a linear power supply is straightforward once you understand how it works. You could follow these logical steps:

In a switching mode power supply the raw AC mains is rectified with a bridge rectifier and then smoothed with a reservoir capacitor, delivering a DC voltage of around 300V (the peak voltage of the AC mains supply). This is used to drive an oscillator which turns the current back into AC or very often simply switches it on and off, typically with a frequency of 50kHz - 1MHz. This then feeds the primary winding of a transformer, serving the dual purpose of reducing the voltage and providing isolation from the mains. Where the transformer is driven with on-and-off DC rather than AC it delivers a mainly unidirectional on/off output on its secondary winding. In this case a bridge rectifier is not required and instead a single diode can be used as a rectifier, mainly just to prevent the current flowing back through the transformer from the reservoir capacitor during the off half-cycles.

In practice you will often see minor variations on the theme. The error amplifier may not exist as such; often the circuit uses the fact that a LED (as in the opto-isolator) doesn't work at all until you apply a certain minimum voltage, and so this voltage is effectively used as the voltage reference.

The oscillator is usually an integrated circuit but this very often drives a separate power transistor to actually switch the current to the transformer on and off.

There is often a filter comprising a capacitor and/or an inductor between the mains input and the bridge rectifier. This prevents any high frequencies from the oscillator leaking out onto the mains and causing interference in other equipment.

Laptops invariably come with a separate switching mode power supply and charger working as above and delivering 15 - 20V. Within the laptop itself this will drive several further switching mode power supplies to generate the several voltages required internally. These work in broadly the same way except that the bridge rectifier and reservoir capacitor are not needed since they are powered by DC from the charger. Also, there is no need for isolation as that function has already been served by the charger, and so a simple inductor is used instead of a transformer.

Low energy light bulbs often contain a switching mode power supply which again doesn't require the isolation and so may not contain a transformer. 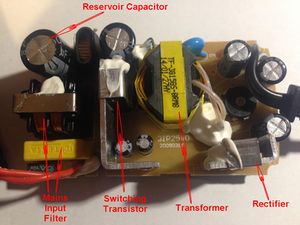 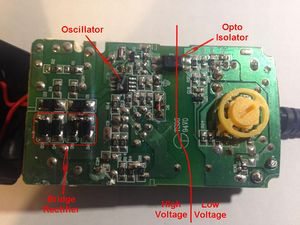 The photos show the top and bottom of a switching mode power supply from a wall cube.

On the underneath you can clearly see the bridge rectifier, the oscillator integrated circuit, and the opto-isolator. The latter spans a very clear divide on the circuit board between the high and low voltage parts. Any switching mode power supply you come across without this divide (such as some cheap Far Eastern chargers) are potentially lethal and must be disposed of. (This power supply has a selectable output voltage, the yellow piece being the voltage selector.)

On the top you can clearly see the reservoir capacitor and the transformer, which like the opto-isolator, spans the high/low voltage divide. A switching transistor, driven by the oscillator, does the hard work of switching the current on and off. There is also a mains input filter.

Fault-finding a switching mode power supply may be limited to a visual inspection. Beyond that it's much harder than a linear one on account of the greater complexity. Also, the prevalence of surface mount components makes repair much more difficult.

Laptop and some other "wall-cube"-type or free-standing power supplies have sealed cases and are not generally designed to be opened. If you do crack the case open it's unlikely that you would be able to re-seal it to a standard which would pass an electrical safety test. Were it to come open in use, it's likely that highly dangerous live metal parts would be exposed.

Note that it would normally be very dangerous to try to fault find a switching mode regulator by checking voltages with it switched on since it's not usually possible to expose the low voltage side without also exposing the high voltage side, which is directly connected to the mains. In any case, faults are more likely in the high voltage circuits which are often more complicated.

Before doing any fault finding, disconnect from the mains. Note also that even so, the reservoir capacitors on the mains side may retain a dangerous charge for a long time, which could potentially give you a lethal electric shock.

There may be several reservoir capacitors on the high-voltage side - you must make sure they're all discharged. Sometimes, most of the charge in the capacitors will have drained away through the circuitry attached to it or by leakage, but you don't want to discover it hasn't discharged by getting a shock, so start by assuming they haven't discharged.

Make sure you know how to safely discharge capacitors and do so before proceding.

You can now safely perform a visual check, looking for any signs of overheating, or any leaking or bulging electrolytic capacitors.

Check continuity from the plug through to the bridge rectifier. This will involve the fuse in the plug, maybe another fuse on the circuit board, and often a mains input filter.

Check each of the 4 diodes comprising the bridge rectifier. If you can, test the reservoir capacitor.

Beyond this, testing becomes increasingly difficult. The oscillator is often a integrated circuit which would be hard to test, but sometimes it will comprise one or two transistors which you may be able to unsolder and test. Check the markings on any transistors and Google for them. Should these have failed there's a good chance you can find replacements.